The Guangzhou – Guilin High-Speed Railway, part of the Guiyang – Guangzhou High-Speed Railway, has 51 pairs of daily bullet trains in service, including 7 pairs of G trains and 43 pairs of D trains. Among the D trains, there are 13 pairs that stop at Yangshuo. High-speed trains operate at different train stations in both cities: Guangzhou South/Guangzhou railway stations and Guilin/Guilin West/Guilin North railway stations. With the design speed of 300 kph (186 mph), high-speed trains using 2.5 to 3.5 hours to finish 480 kilometers (298 miles).

In addition to high-speed trains, there is one pair of ordinary overnight trains between Guangzhou and Guilin, with the travel time of 11 hours. 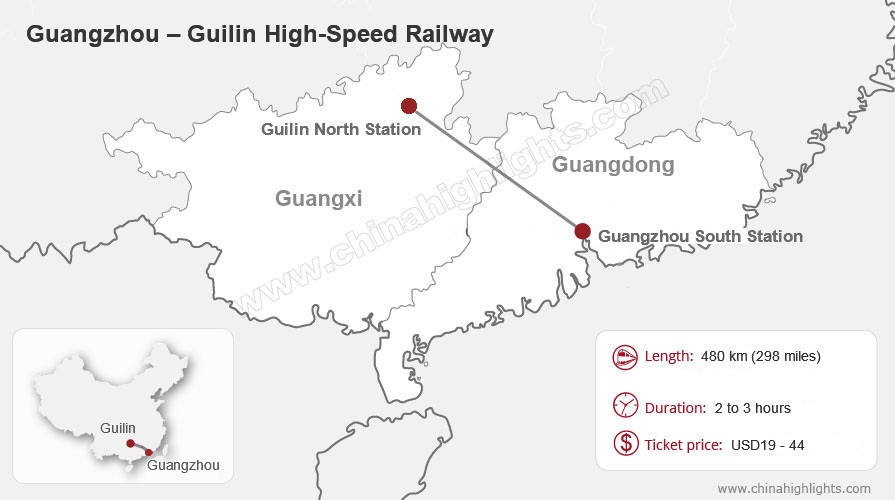 Schedules above is only for your reference. For the up-to-date timetable, please click Guangzhou – Guilin high-speed train schedules.

2. Among the three stations in Guilin, Guilin Railway Station is the closest to the city center, with convenient public transportation to other parts of the city. 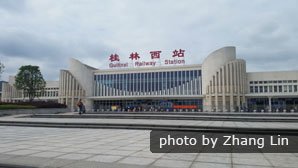 3. Guilin North Railway Station is the main station for high-speed trains to and from Guangzhou. It is near the suburbs but has easy access to downtown via local buses.

4. Guilin West Railway Station is a newly-built station for high-speed trains to and from Hong Kong, Guangzhou and Guiyang. It is also far from the city center and only connected to other parts of the city by one local bus.

There is only one overnight sleeper train running between Guangzhou and Guilin, with the travel time of 11 hours. This train starts from Guangzhou Railway Station and ends at Guilin North Railway Station. And it goes further to Shenzhen in the south and Jinchengjiang in the north.

Bullet Trains Between Guangzhou and Yangshuo 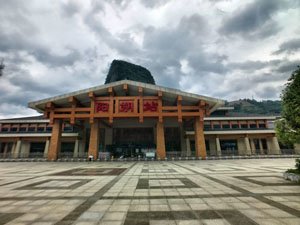 Yangshuo has become a popular destination for foreign tourists. Since the operation of high-speed service in 2016, Guangzhou - Yangshuo rail line has become one of the busiest routes in China. Tickets between Guangzhou and Yangshuo are very popular during weekends and holidays. So it is recommended that you book the tickets as early as possible. 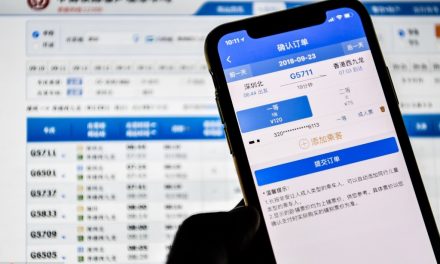