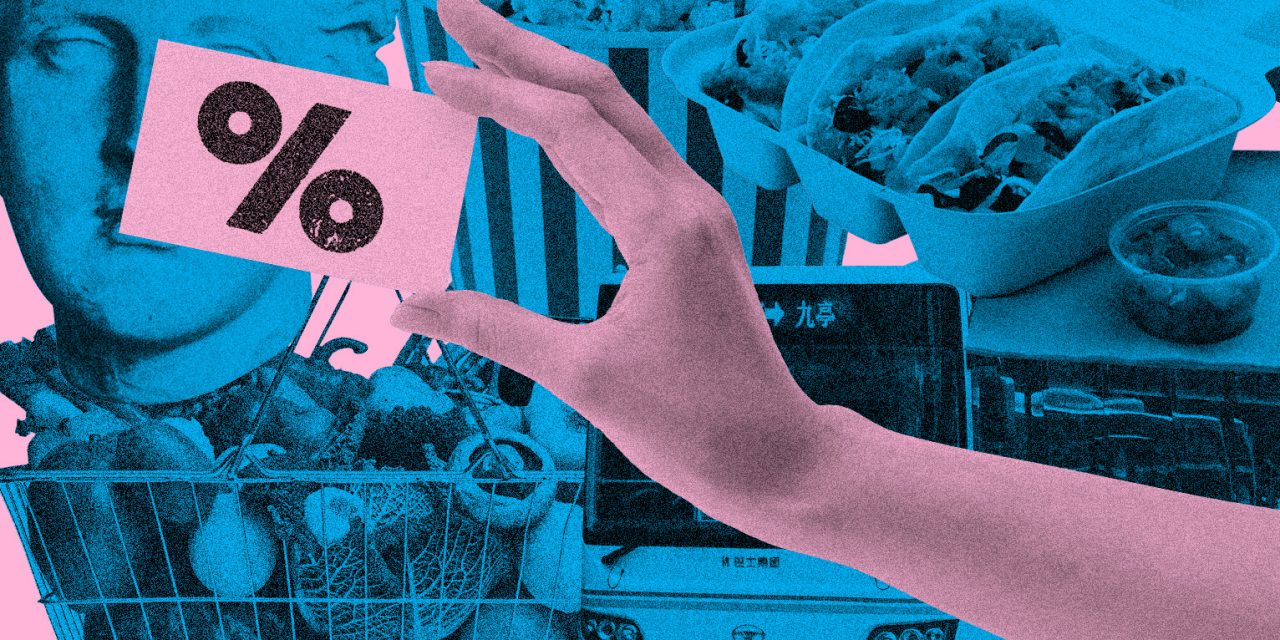 
What you get: Four coupons per month (each less than 10rmb), plus 50% off at a long list of restaurants.

Why you should get it: It’s no longer a secret that you can often get much cheaper deals on Ele.me than eating at the same restaurants. Adding to the “sad desk lunch” phenomenon, the Ele.me Supermember (饿了么超级会员) membership offers various discounts on restaurants, plus exclusive deals, and some of the coupons can stack up. If you’re a heavy user of Ele.me already, and not planning (or able) to quit it anytime soon, there’s no reason not to join.

I joined for the sake of this article. And all those mental tricks and contortions I used to avoid Ele.me before were wiped away. The box was opened. Being a Supermember is pure temptation, giving in to your basest (delivery) desires. If you were like me, an Ele.me avoider, do NOT get this membership.

How it works: On the Ele.me app (either a standalone app or through Alipay), click “我的” to see a banner ad that says “超级会员”. Click on it to choose a subscription plan:

As of May 2019, the monthly membership is 6rmb for new members. When you pay, they give you a hongbao as well with coupons, though the amount varies (AI determined?). After your membership expires, the price reverts to 10rmb per month, 15rmb per season or 108rmb per year. 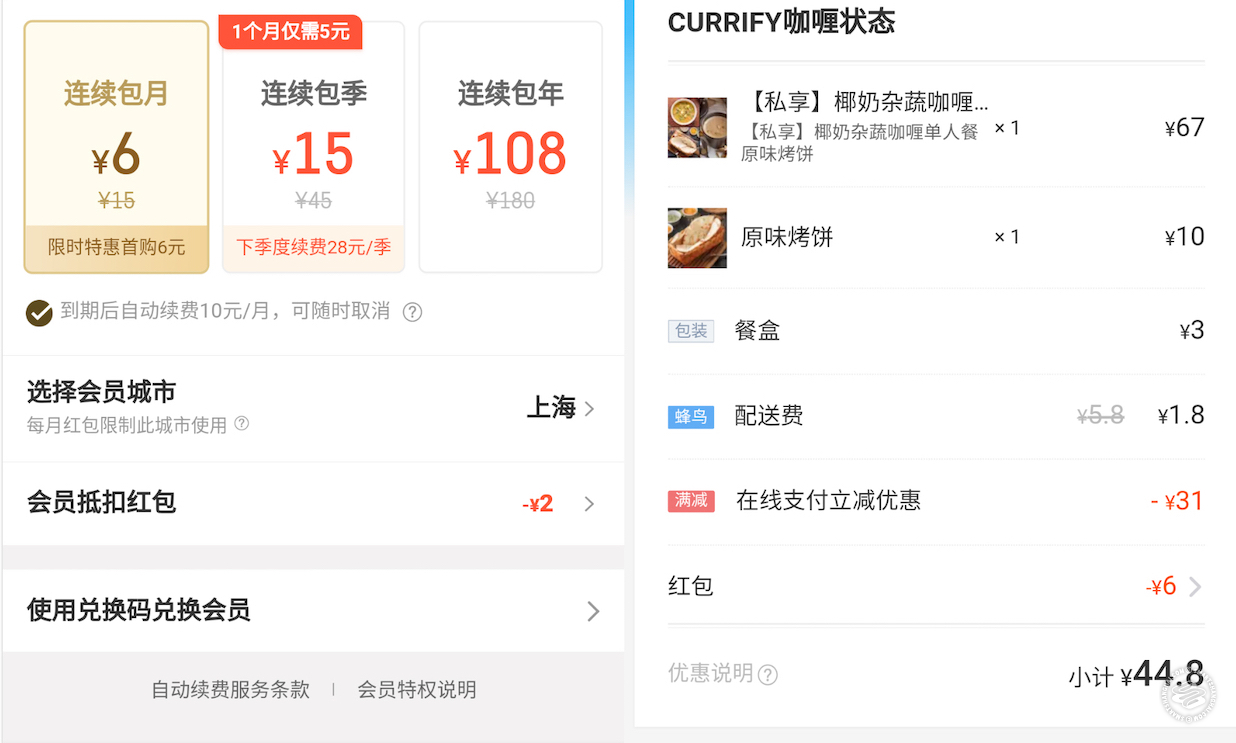 The monthly membership comes with four coupons from your favorite restaurants that you can return if you change your mind. Each coupon is worth 4-6rmb. So one coupon might just cancel out the delivery fee, and most of the time, the coupon plus the original deals offered by the restaurant can save you more than just a few kuai. On a Currify lunch order (pictured above), for example, I saved 37rmb. Delivery was an absurd 1.8rmb.

There’s also a special deal feature (专享折扣商品) on your Supmermember page: deals up to 50% off from an almost never-ending list of restaurants (Element Fresh’s Veggie Spaghetti is 19.9rmb) only available to the Supermembers. Click “抢” to add it to your cart. 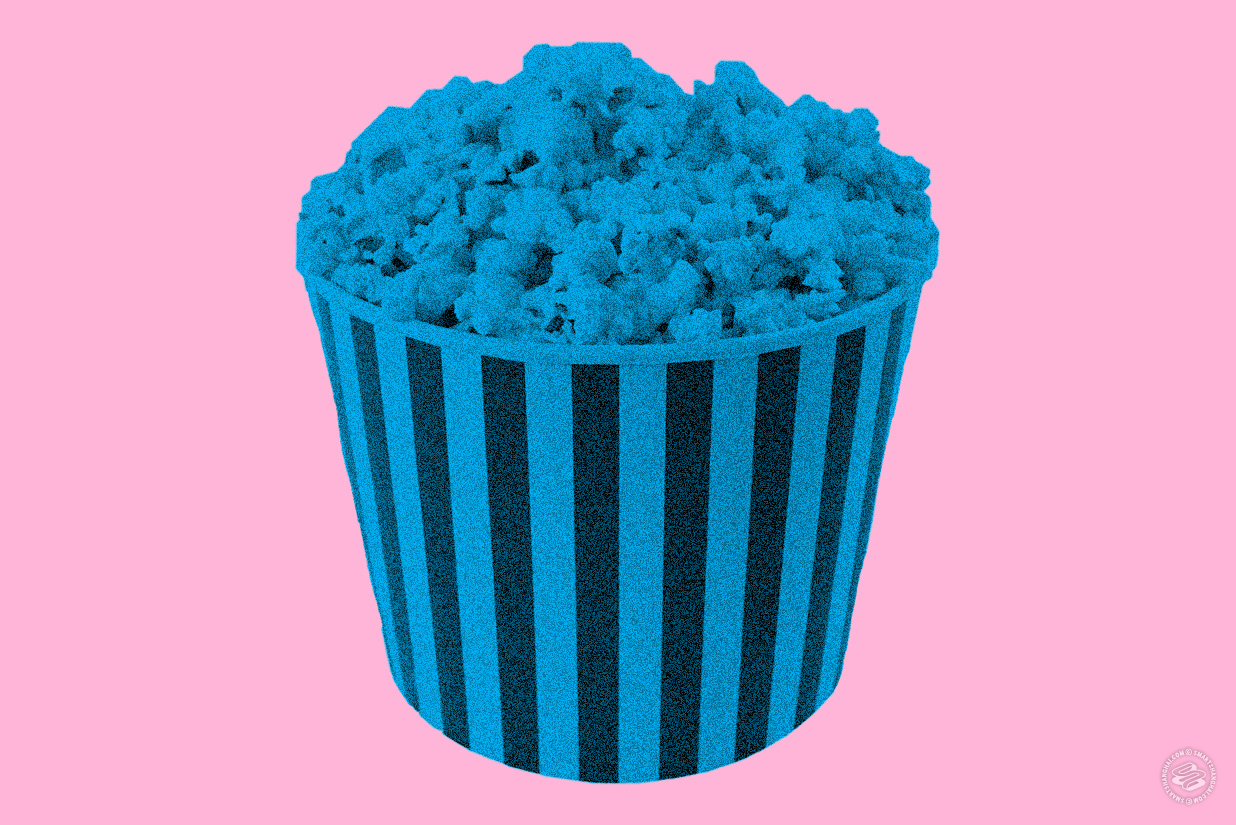 
What you get: Top up at least 300rmb a year to get a discount on movie tickets: roughly 20-40rmb cheaper than Maoyan (Wechat) and Taopiaopiao (Alipay). Valid for all the Palace / Premiere chains throughout China.

Why you should get it: The cinema chains (Broadway, Wanda, etc) offer the cheapest price on their apps. Broadway is just one example (Download).

How it works: Top up 300rmb or more in your membership card (expires in one year), then buy tickets as usual: select the theater and book the seat. Pay with your membership money. 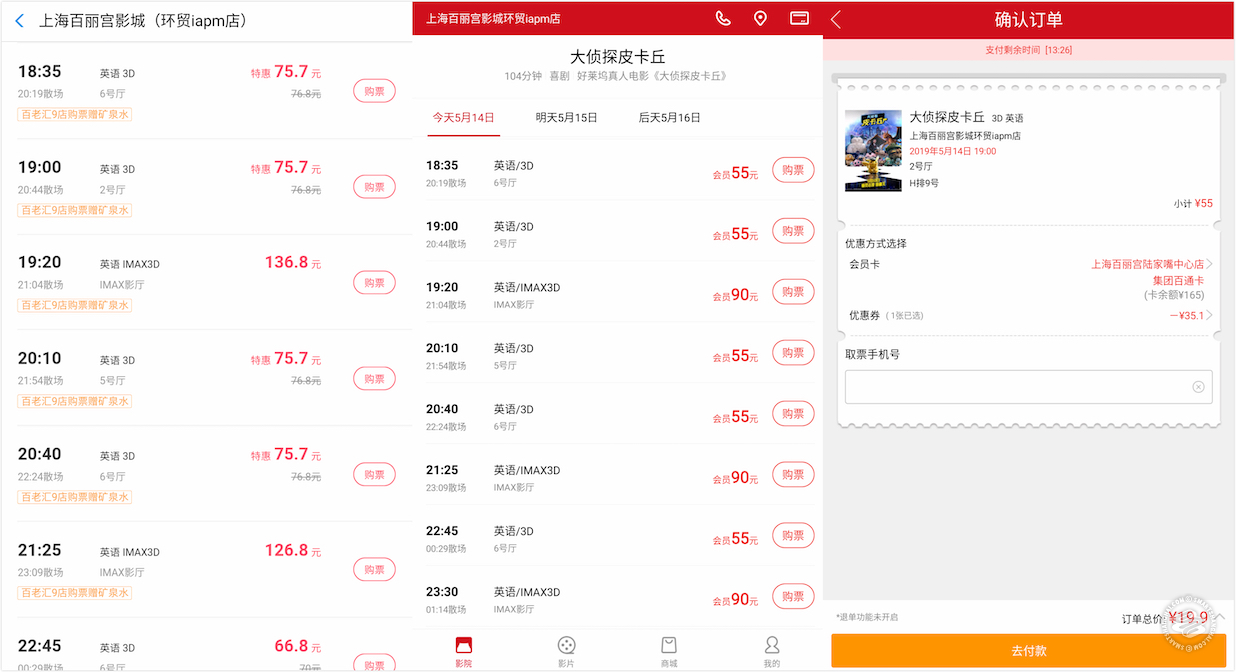 
This app also gives coupons every once in a while (they can’t be used for IMAX/LUXE screens, though). For instance, the 3D Original Pokémon Detective Pikachu at IAPM was 55rmb on the app vs. 71.7rmb on Taopiaopiao and 79rmb on Maoyan for the same time. With a coupon, the prices come down to 19.9rmb on the Broadway app.

Taopiaopiao and Maoyan offer super cheap special deals, too. But they are often time-consuming and complicated to get. In comparison, the Broadway app is rather straightforward. 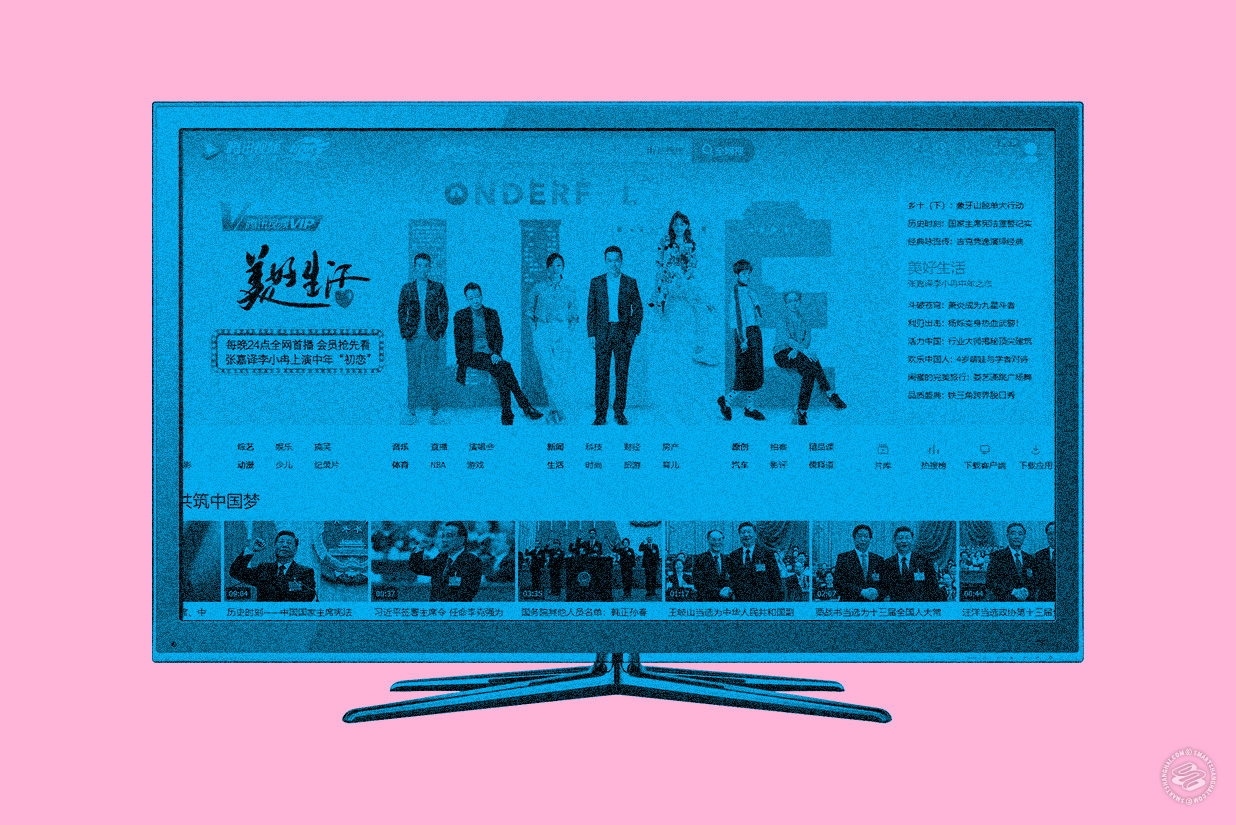 
What you get: 12rmb (month) to 40rmb (season) for ad-free, HD streaming of popular TV shows, new movie releases, and documentaries, distributed exclusively by Tencent in mainland China.

Why you should get it: Among the major video hosting sites in China — Youku, iQiyi, Bilibili — Tencent alone has distribution rights for HBO’s Game of Thrones, West World, and Big Little Lies (all “clean” versions), as well as many other popular urban fantasy series. It has a decent library for mainstream Hollywood films, documentaries from BBC, ITV, and National Geographic. All in English with Chinese subtitles. VIP members can stream the videos in Blu-ray 1080p and iOS users (above 5.9.0) can have access to the Dolby Vision format.

How it works: Visit film.qq.com, log in with your QQ or WeChat account, then click “开通腾讯视频 VIP”. New members pay 12rmb for the first month, 15rmb for the second month.

A membership will get you unlimited access to the films that have the “VIP” tags, in addition to coupons for those that have the “付费” (pay to view) tags — usually the newly released Hollywood blockbusters. 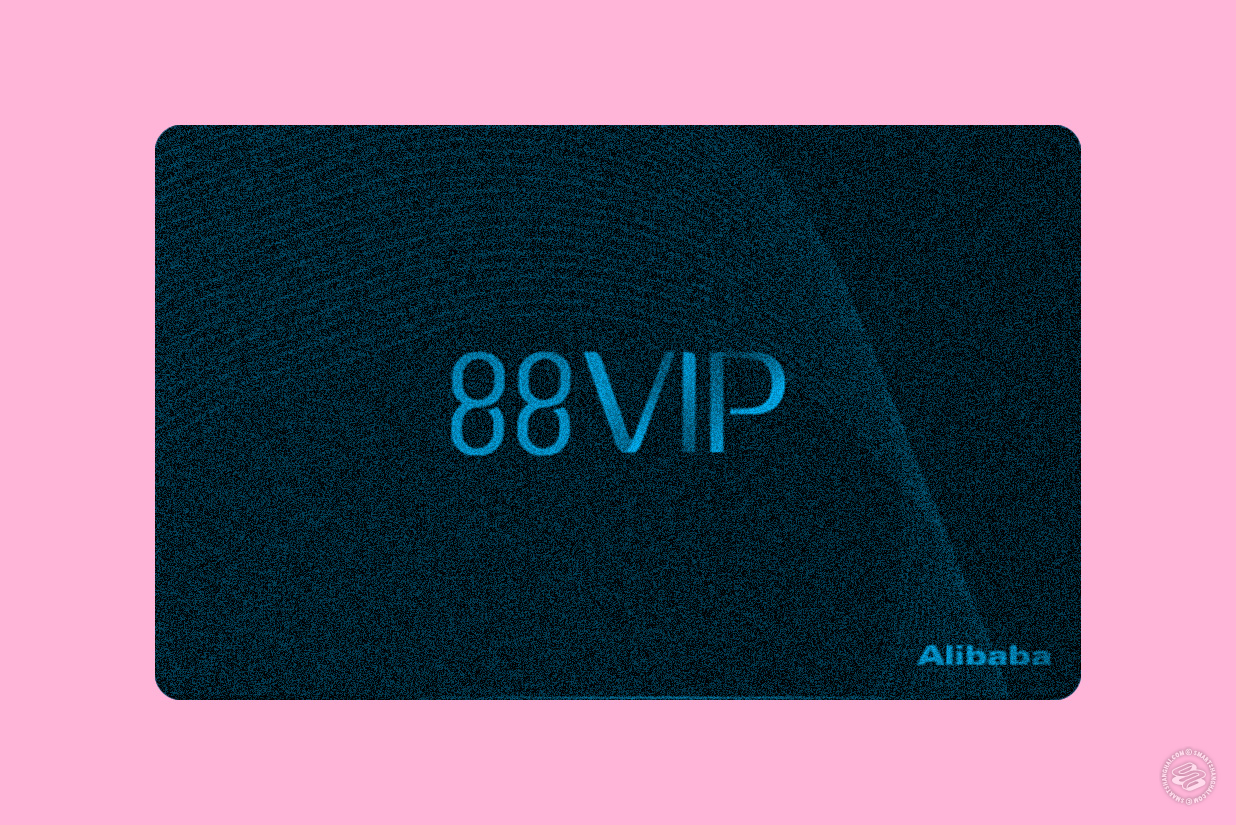 
What you get: For 88rmb per year, you can get a 5% discount on 288 brands (Royal Canin, Abercrombie & Fitch and Zwilling), a discount at major retailers such as Tmall Supermarket and Tmall International, 300rmb worth of coupons for 3C products, plus a one-year membership to Youku VIP, Ele.me Supermember, Taopiaopiao, and Xiami VIP (all of them).

Why you should get it: 88vip is like the Infinity Gauntlet of mainstream memberships. Like the gauntlet, not everyone can wear it: a Taobao user must reach over 1,000 “淘气值” (“taoqizhi” level) to qualify for the 88rmb annual price. Otherwise, it costs 888rmb. Reality is often disappointing.

The 88vip is a good deal if you are already a frequent user of the above platforms. It gives you coupons on all these platforms plus a total of 300rmb worth of coupons for 3C products. Spend 1,760rmb a year on Tmall Supermarket and other supported outlets and you make the money back. 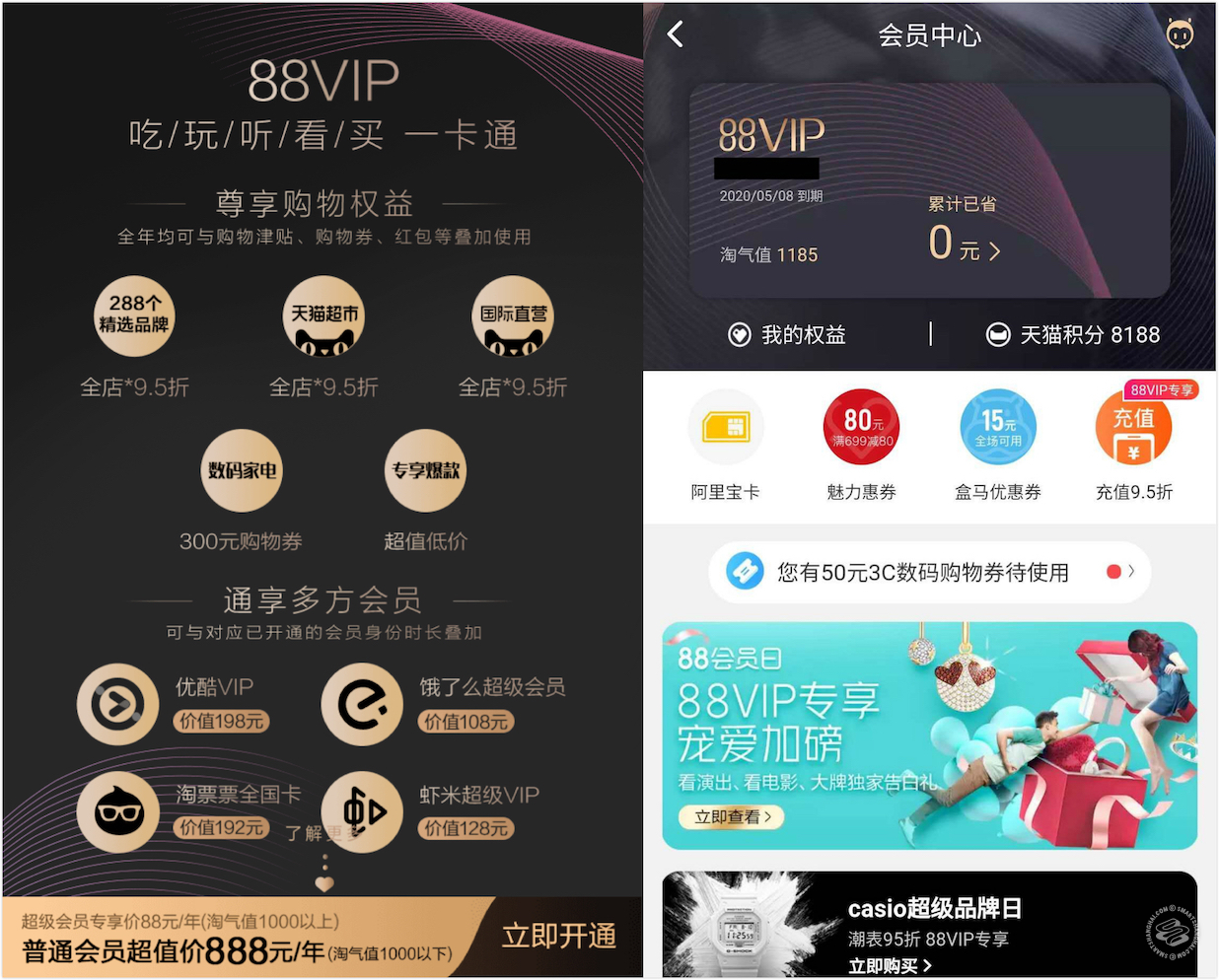 How it works: First you need to check if you’ve reached 1,000 taoqi level by hovering your mouse over your username on Taobao. The taoqi level is a combination of your purchases, reviews, and how fast you confirm the delivery, etc, and updates on the 8th of every month.

If you have reached the 1,000 taoqi level, go to the Taobao VIP page and scan the QR code with your Taobao or Tmall app. Click the “立即开通，尽享权益” to pay the membership fee.

Go to your 88vip page, where you can find the links to your Youku, Ele.me, Taopiaopiao, and Xiami accounts and start to use the coupons.

Similar memberships: Amazon Prime is 288rmb for 13 months (including a one-month free trial). It comes with free e-books, free shipping nationwide, and free shipping worldwide on purchases over 200rmb (available for the products you buy from Amazon US, UK, Japan, and Germany). It’s worth the investment if you can’t find the niche brands / official retailers you want on Taobao or JD.com. 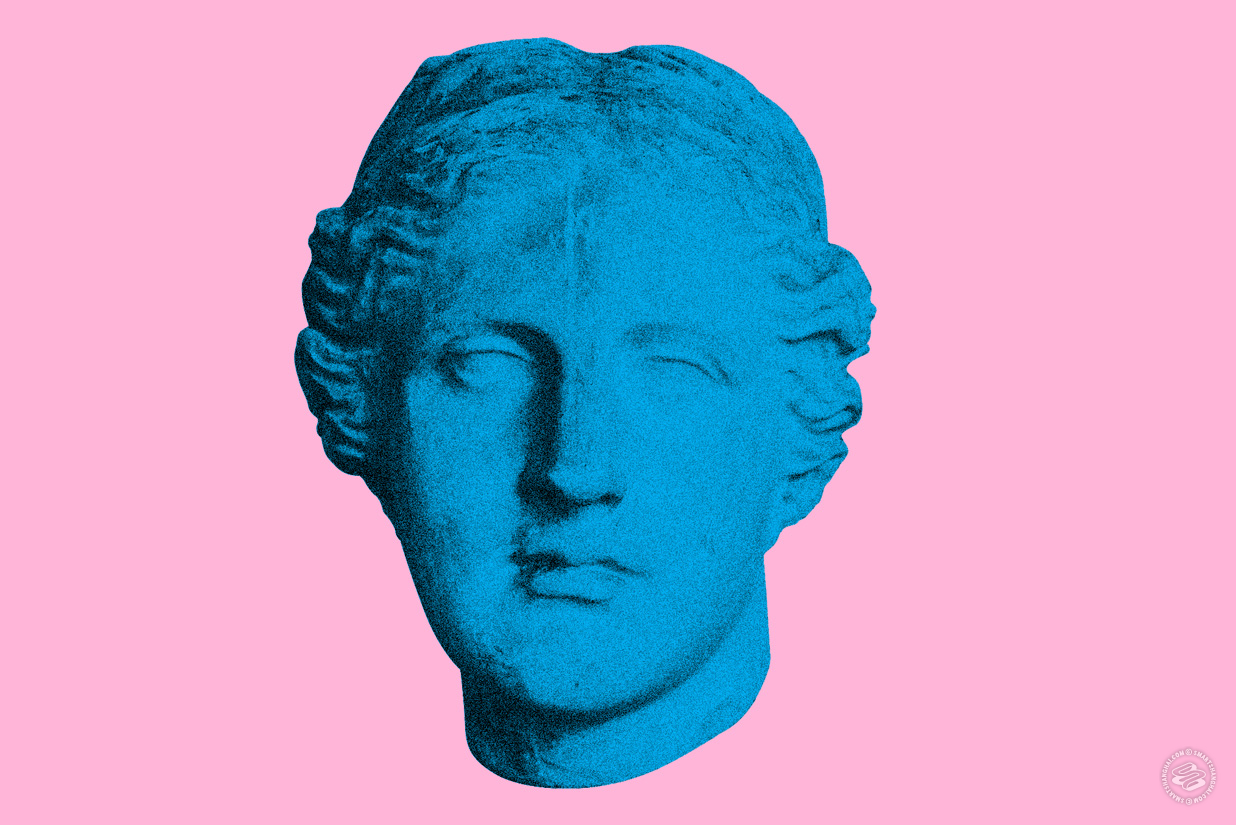 What you get: 600rmb for two years of unlimited free access to all exhibitions in the museum, half-price for one companion; 15% off on tickets for four major museums in Shanghai, including Rockbund Art Museum, Yuz Museum, and Powerlong Museum; three vouchers worth 600rmb in total for the hotel adjacent to the museum, plus discounts at private cinema / cafe Extra Time.

Why you should get it: HOW Art Museum has become one of the most popular contemporary art museums in Shanghai in the short time it has been open. It hosted the first large-scale solo exhibitions of Joseph Beuys, Leandro Erlich, and Quayola in its three-story space. A few other museums offer annual memberships that cost 300rmb, but none offers as many benefits as HOW Art Museum. Look at this long list of discounts (check the Chinese site to see the 2019 update).

Not only does this membership offer the basic benefits of a VIP visitor — free exhibition, activities, opening events, guided tours — it also provides 15% discounts on some of the most active contemporary art museums in Shanghai: RAM, MCAM, Yuz, Powerlong, as well as UCCA in Beijing (20% off), Times Museum in Guangdong, and A4 Art Museum in Chengdu. Worth it if you’ve been paying 100rmb to get into shows..

How it works: Go to the membership cards page. Click “Buy Now” then fill out the address info and “submit order”. After you pay for the membership online, they will send the physical card to your address. You can also activate the card on your WeChat by following HOWstore: “HOW会员” then click “实体卡激活”. 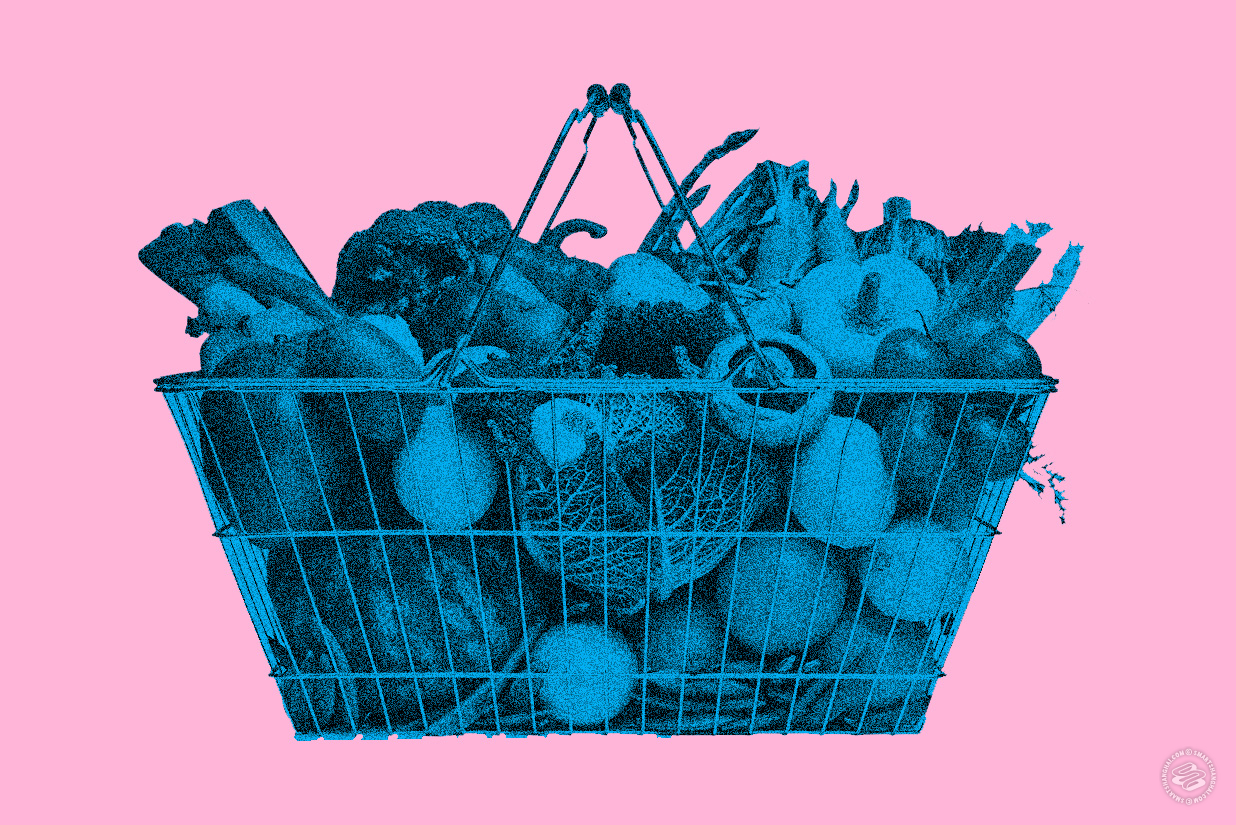 Cityshop and Other Food Retailers


What you get: A points for money spent scheme, ultimately redeemable for cash coupons.

Why you should get it: It’s free and you spend a lot there already.

How it works: Go to Cityshop.com.cn to access their mini-program. Once you have authorized the mini-program on your WeChat, show your membership card when paying the bill to get points. Mainly it works like this: one rmb gets you one point until you hit 5,000 points in a year, and then you become a Silver VIP, and one rmb becomes 1.5 points. There’s a Gold Level at 15,000 points (lots of cereal, so much cereal), at which your one rmb becomes two points.

Exchange points by clicking the “Point Mall” on the mini-program homepage. As of May 2019, 1,000 points gets you a 5rmb coupon; 40,000 points, which you really should never get to, shop somewhere else for chrissakes, gets you 200rmb. 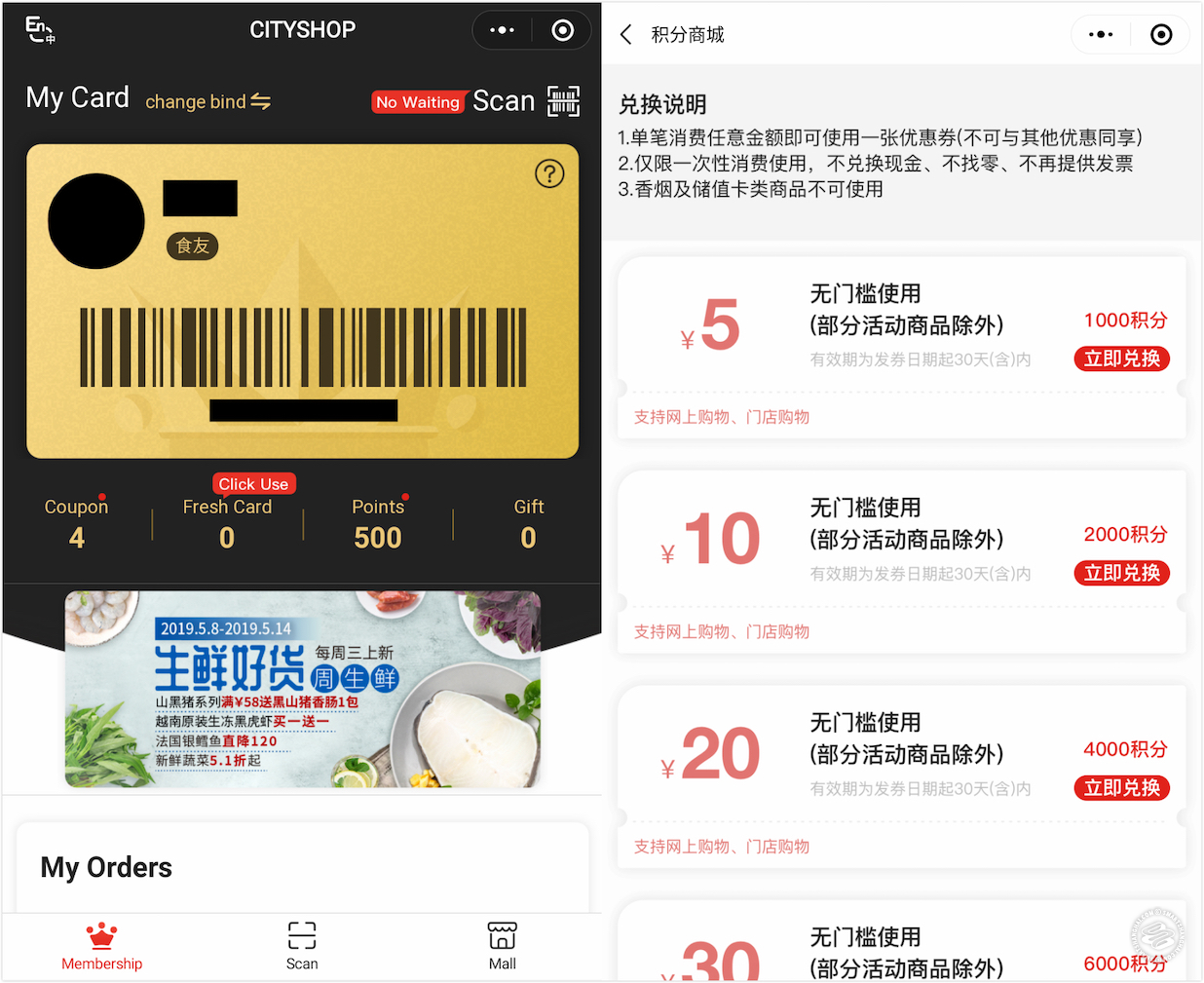 membership requires a single purchase over 200rmb to join and get a Green Card (no, it does not work in America). After that, you get 10rmb for every 1,000 points. If you hit 20,000 points in a year, you get bumped up to Gold status, at which time you get a 3% discount on all purchases. Fill out a form with your receipt at the reception desk to join.

FamilyMart: Basically 1% back. Use the mini-program, get 100 points (one rmb = one point) and you get 1rmb off. Points expire in a year. Just tell them “用积分付”(pay with the points).

membership (218rmb/year) comes with tons of benefits. Including 12% off on all products on Hema, free vegetables, coupons you can stack and so on. The membership is quite transparent and lets you see how much you’ve saved. They will also partially refund your membership fee if you haven’t saved 218rmb. Recommended if you’re a heavy Hema user. 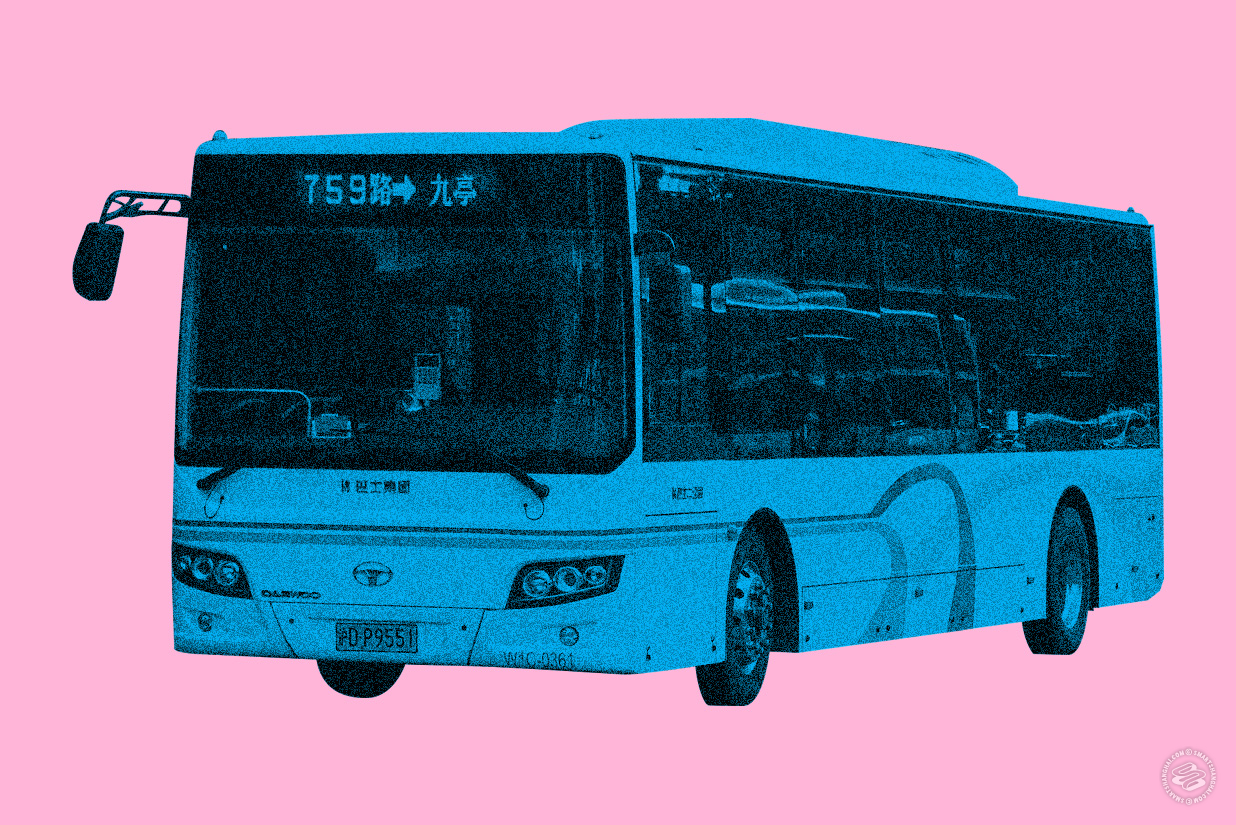 Why you should get it: Shanghai’s public transportation is really cheap and reliable compared with other international cities. It runs everywhere and the hours are getter later and later. If, like me, you use the metro every day, then this is a must-have. In a year, it can save you a few hunded kuai — enough to pay your VPN bill. 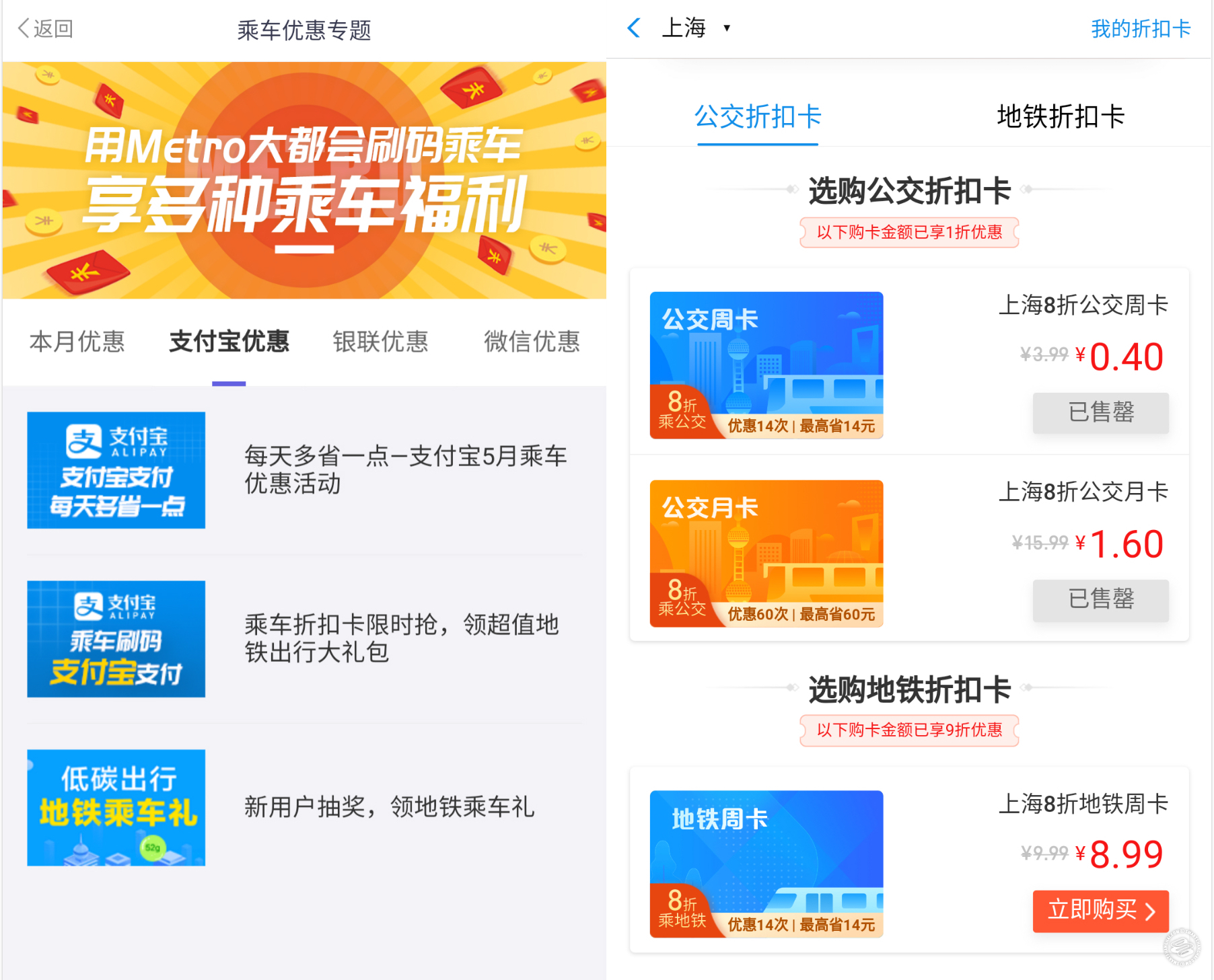 How it works: If you use Metro 大都会 app, which allows you to get into the metro via a QR code, click the first icon “乘车优惠” (public transport discounts) on the home page. It then shows four tabs that mean: monthly deals, Alipay deals, Union pay deals, and WeChat deals. Note that the deals may vary each month, and some deals sell out fast.

Let’s take Alipay’s discounts in May as an example: when you click the first option (Alipay 5 月优惠活动, deals of May), then 天天享折扣 (discount every day), the app redirects you to the Alipay app, which has options for bus ride memberships and metro membership:

So for 0.4-8.99rmb, you can purchase the membership cards and get 20% off two rides per day. For the 8.99rmb metro card membership, you can make the money back in three days (six rides, 4rmb per ride).