[On The Radar]: Ala Town, The New Laowaijie 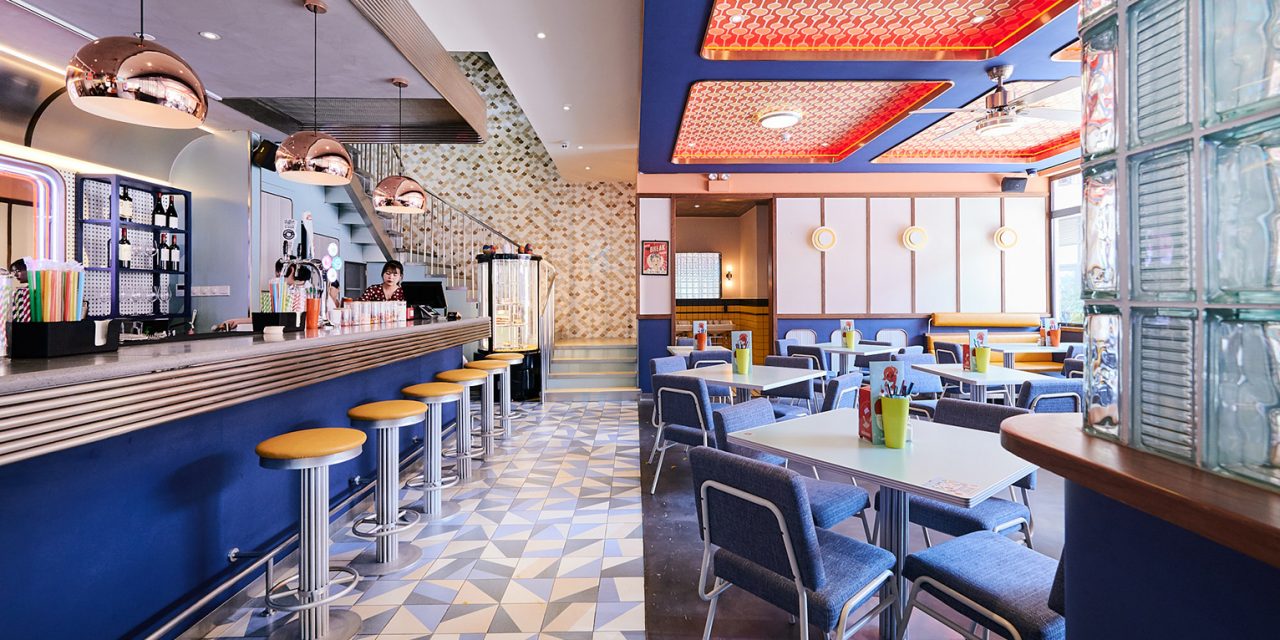 
What It Is: Did you know Minhang is the fastest growing district in terms of population? Bet all those people are going to need somewhere to go. Hence Ala Town, a government sanctioned "lifestyle hub" in two parts: a several-story open atrium mall, and a 200-meter stretch of purpose-built F&Bism, a five-minute walk from Longbai Xincun, right behind Aegean Place. It is explicitly pitched as the successor to Hongmei Lu/Laowaijie. Which is two stops away by metro and could probably use a break. And a bleach hose-down.

Technically, Ala Town has been in trial operation since last summer, but since it's in Minhang, we only just heard. Plus, construction work is still in full swing and a handful of bays stand empty. So what's available in here right now? A little over half a dozen bars, restaurants and diners, mostly owned by Shanghai Brewery (rebranding to Shanghai Brew House). [Ed's Note: I've been informed that the name of the company is BRC China and is not to be confused with Shanghai Brewery.] For example: Quick Take: Where you get your nachos and frozen margaritas


What It Is: Pistolera but with better nachos. If the sombrero hat lightshades and the screen showing Coco on repeat doesn't tip you off, this is a Mexican joint. The double-sided menu is long, filled with 75rmb burritos, enchiladas and chimichangas, tacos, quesadillas and 50rmb frozen margaritas. The pulled pork nachos were pretty good. The tacos were overzealous. Chorizo and grilled zucchini didn't play well, nor did spinach and pulled chicken, or beef brisket and the green stalk of spring onions. Just slap some salsa and grated cheddar on top! They're like 25-30rmb each, I'm not expecting haute-cuisine. Nice touch: you can choose between hard shell and soft shell. There is only one correct choice Side-note, not particularly relevant, but unlike, say, Cantina Agave, which serves their margaritas in dainty stemmed glasses, these margaritas come in sturdy beakers. Paired with a 2-8pm half-off happy hour, that is some practical thinking. Robust! I'd describe Tequila Loca as "robust." Quick Take: A tongue-in-cheek ode to the 50s diner.


What It Is: The dozens of rubber chickens suggest they might not be taking this too seriously, but it's still chrome, tiles and booth seating and rock'n roll on the sound system. There's a guy in a white t-shirt flipping burgers on a flattop and a waitress in a polka-dot dress. You can almost taste the looming specter of nuclear annihilation. The sign over the door reads "Eggs, Chicken, Booze" and while that's technically accurate, it doesn't convey how cartoonishly American the diner nosh is. It starts with double-patty cheese burgers and fries, tall milkshakes, stacks of pancakes and waffles, then veers off into DIY omelettes, sandwiches and melts, a huge English breakfast, all day brunch and avocado toast. I hear JFK was stress-bingeing those through the whole Cuban Missile Crisis. The cheeseburger is 68rmb, the milkshakes are 50-55rmb, and a stack of blueberry pancakes cost 58rmb. None of them are the best in the city, but they are big, bold, perfectly aligned with their surroundings, and designed for the most American ideal: gross overindulgence. 
What It Is: It's the first building you see as you come in. Shanghai Brewery's Ala Town HQ is a sprawling, two-story pub with ample outdoor seating, pool tables, TV screens, space for a live band, and beer grub in the sort of "88rmb for a burger" range. On tap are twelve house brews (two are rotating) that cost between 40-50rmb for a large glass. The beer is North American style which, I was informed by a man who looked like he knew what he was talking about, is hoppier than most. Don't @ me beer nerds, I'm just conveying what I was told. Some, like the Draggin' Dragon Smoked Lager, would be difficult to drink many many pints of with your friend who only wears football jerseys, but others, like the Vine Serpent IPA (they're named after the Chinese zodiac) was bright, refreshing and balanced. Beer talk! Shanghai Brew House is where you end up after work if you're 45 years old and can't be bothered to go into town to the Camel. Bless these spaces! They are the cocktail lounges of the expat engineers on cushy packages, and teachers working in Songjiang, and they deserve somewhere to drink.

First Impression: Would I come out here if I lived in Xuhui? Of course not, the city center isn't going anywhere until the river bursts its banks. Would I come here if I moved to Minhang after the rent rises for the eighth time in two years? Absolutely. There are like fifteen happy hours here. Actually, I might go back just for the Drunken Hen. Love that place! It's whirling rubber chickens over its head, blowing bubbles into its milkshake and going "we are 100 percent committed to getting you fat and fucked up with a smile." It's the only place I saw that felt like its own thing, and I will be having my birthday there.

Ala Town is still squeaky-clean and fresh-faced, full of excitement and enthusiasm to provide just the best darndest experience for everyone. I didn't see a single waiter with the sunken features of someone who's spent years serving foreigners their seventh round of margaritas. Give it ten or fifteen years!


We could only manage to fit three places in, but there are a bunch more. Bourbon Cookhouse is attached to Tequila Loca and does Southern BBQ. This is the second one, they've already got one in Hongqiao Tiandi.

Story Tavern didn't seem open, but is another beer pub.

Vinyl also didn't seem open, but looked like a music bar, with a turntable and shelves intended to be stacked with — we guess — cassette tapes.