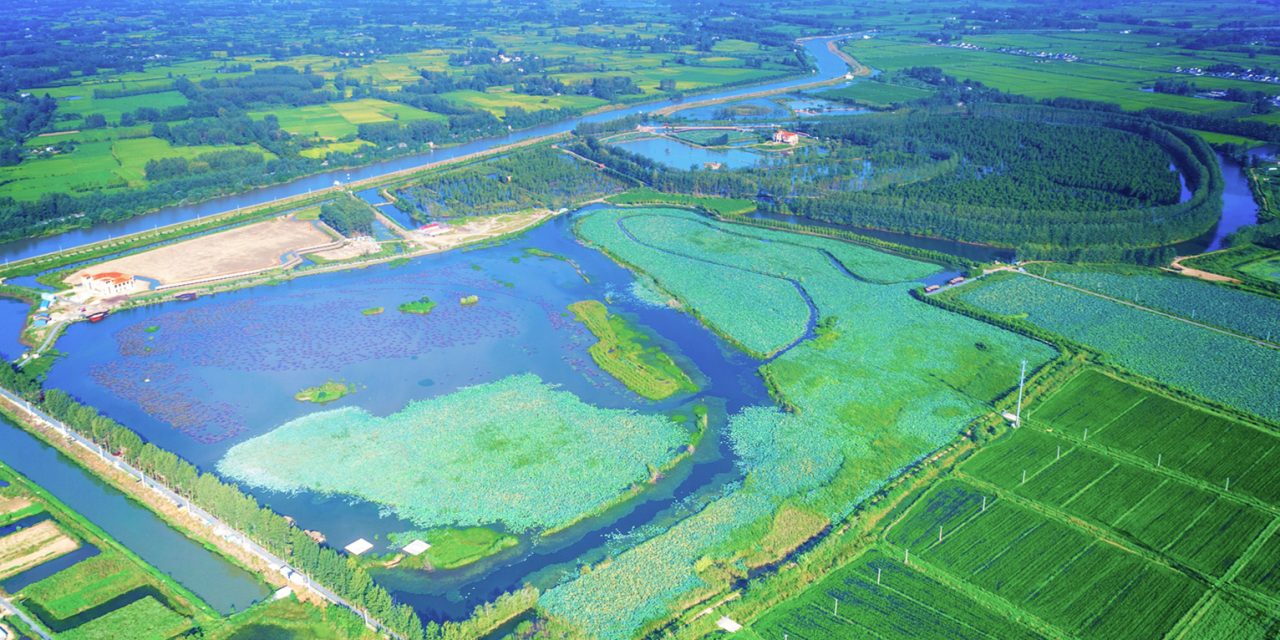 The park was busy. There weren’t any tourists, but the residents of Chishan Lake National Wetland Park — tens of thousands of water birds — had things to do and places to go; it was breeding season. Greylag geese and egrets flew above the lotus ponds, gliding on long elegant wings; herons picked up small sticks to build nests.

Springtime at the new Chishan Lake National Wetland Park is busy, and green. When I went, a few weeks ago, plants were unfolding fresh leaves and large swaths of lotus were on the cusp of blooming. Floating catkins drifted down from trees, creating a winter wonderland effect as they settled on branches like a dusting of snow. Amazingly, this used to be a wasteland.

In the late 70s, the moist soil here wasn’t suitable for any crops. Locals then planted 50,000 pond cypress trees (“chishan” in Chinese), making it the largest pond cypress forest in eastern China, on the border of Jiangsu and Anhui provinces. In 2004, there were plans to cut down all the trees and convert the area into a fish farm. But here’s where it gets really amazing: in stepped a private business owner, Han Huishan, to save the forest by signing a 30-year contract to lease the land. One man, 50,000 thousand trees. Over the past 13 years, Han’s team has restored the land to meet the standards of China’s National Forestry Administration for a national wetland park. The park opened in May 2019. If making a profit out of a conservatory project is a part of his business plan, Han clearly isn’t in a hurry. The Chishan Lake park, which covers nearly four million square meters, still wasn’t completely ready when I visited it in mid-May with Shanghai-based birding expert Dr. Kai Pflug.

Though not officially opened, the park has already let in bird photographers from across China and hosted educational activities for kids. Summer (the photos below) is the best time to visit, when the lotus and water lilies bloom. 
These houses are waiting for their license to host tourists. But the pond cypress forest was the main reason for my visit. The graceful trunks and limbs of the trees are stunning in every season. The park has two areas, one big and one small, where the pond cypress trees grow. The footpath through the smaller one has no barriers – perfect for getting a close look at the trees, not perfect for selfies. On the other side of the small forest, there’s a swan lake, a lotus garden, and a few small fields with alpacas, cranes, and crocodiles (separate). 
Throughout the years, nearby villagers have also learned to take care of the birds who occasionally fly out of the wetland and can’t find their way home. After forest patrols noticed some birds died from eating pesticide-laced near the forest, Han bought the surrounding land, too, and replanted it with edible lotuses and jiaobai, which don’t need chemical fertilizers. In total, Han has reportedly invested more than 300 million rmb in the project. Over 100 bird species have been recorded in the park. Last year, a birder spotted four Baer's Pochards building nests, a bird categorized as critically endangered on the IUCN red list. Clearly, Han’s endeavor is working for the birds.

We entered the large cypress forest by boat. Herons and egrets were all around, with many more off in the distance. 
Unlike my birding experience in Shanghai’s wetland, this time I didn’t need to look for the birds; they popped up in my binoculars as the boat drifted through the lake. Oftentimes, there were multiple birds perched on the same tree, taking care of their nestlings. And then a group of juvenile herons would appear, standing motionless together on a piece of fallen wood. 
Other than the more common birds like Eurasian Magpies, Azure-winged Magpies, Black-crowned Night Herons, and Little Egrets, I spotted: Eastern Cattle Egrets, Ruddy Shelducks, Eurasian coots, as well as China’s symbol of love, the beautiful Mandarin ducks. I marveled at the small blue eggshells on the ground, taking notes with my voice recorder and feeling like David Attenborough. 
The park is equipped with a few monitoring stations for water quality and disease prevention. As the wetland water body doesn’t move much, water from the Chishan lake is regularly introduced into the large lotus pond to keep it fresh.

The second day, we arrived at the park around 6am to try out the birding hides built on the water. They gave us a view that’s level with the water surface. The forest was bustling with water birds. In the hide, however, distinctive birdsong filled the air but by the time I could get my binoculars up to see the singer, they had flown away. Although the park focuses heavily on conservation and education, a hotel, beer garden, BBQ and restaurants are also in their future plan.

I can’t tell how the Chishan Lake park will turn out once it gets popular. But the sheer amount of birds, in addition to the attractive pond cypress, the large field of lotuses and water lilies, make the park a unique package for now. How to Get Tickets


The park is not too friendly to English speakers just yet, but bear in mind they have only just opened. To get tickets in advance, you’ll need some Chinese skills. First, follow their WeChat (cshsd888). Then click “票务预定” and fill out your information. The system only supports Chinese IDs as of this writing, but they say they are optimizing it to support passports as well. In the meantime, you’ll need a workaround if you don’t have a shenfenzheng, like asking a Chinese friend to input their info and your phone number to receive the ticketing confirmation message, which will get you access into the park. Alternatively, call their Chinese hotline (025 5765 8839). Alternatively alternatively, just show up and buy tickets on the spot.

Adult tickets are 120rmb. Boats to lotus pond (60rmb) and large cypress forest (80rmb) are extra, though walking is okay too. Children (under 1.2m) and senior citizens (above 70) get 50% off. If you book in advance, there are hefty discounts that include entry and the boat trips: 120rmb three days in advance, 160rmb one day in advance or 260rmb the day of. The park is open from 8:30am to 5:30pm. How to Get There:


From Shanghai, take the high-speed train from Shanghai Railway Station to Nanjing Station (about 2 hours) — NOT Nanjing South Station. From there, a taxi is an hour, or switch from Line 3 to Line S8 at Taifeng Lu Station (泰冯路站) and get off at Huagongyuan Station (化工园站). From there, a taxi is about 20 minutes. Use Alipay to access the Nanjing metro card, and Amap.com to navigate: set your destination to "池杉湖国家湿地公园（东门）". Didi rides are easy to find in Nanjing, even early in the morning. The forest park also has parking. 
The hotel inside the park is supposed to finish construction in June 2019, but no word on when it will open to guests. There are a few hotel options in nearby Liuhe district (六合区), though nothing fancy. From Liuhe, a taxi or Didi to the park is 20-30 minutes.