How to Collect Train Tickets After Booking Online

In China, you will need paper train tickets to get into your train. So even if you have already got e-tickets displaying your ID information, train information, and a collection number, you will still need to collect them to board the train.

If you book China train tickets with China Highlights, you will find that there are two options for you to get your paper tickets:

If you pick a delivery service at least 4 days ahead of departure, we can deliver your tickets directly to your hotel. Or you can collect your paper tickets at the ticket window by yourself. Here are some things you need to know in order to collect train tickets in China.

What You Need to Collect China Train Tickets

To collect your paper tickets, you need the right passport(s) and collection number(s). You can't use your booking information to board a train. Boarding China's trains requires tickets — there's no e-ticketing / on-train ticketing.

After you book China train tickets online, you will be issued with collection numbers and information regarding your train number, departure/arrival time and stations, and seat class.

If you book with China Highlights, we will send you a confirmation letter including all the information mentioned below, and useful instructions in both English and Chinese to help you collect your ticket(s) and board your train(s) along with travel tips and the timetable of your train(s).

Copy the collection numbers onto a piece of paper or take a screenshot of them with your device, and make sure they're readable. A collection number is composed of the letter "E" and nine numbers, e.g. E123456789; EA12345678.

2. The Right and Valid Passport(s)

Make sure that you have the passport(s) you used to book your ticket(s) when you collect it/them.

Original passport(s) are needed to collect the ticket(s), which are issued at the ticket window in the railway station. Copies of passports are not accepted.

Q: What if I want to collect my companions’ tickets?

A: Original passports for all passengers are needed to collect tickets at the ticket window if you have booked them online.

Q: What if my passport has been updated since I booked the ticket with my former passport? Will I be able to get my paper ticket?

A: It depends on the circumstances:

1) If you simply updated the expired passport, you can still collect the ticket but need to provide both the old and new passports as verification.

2) If the essential information on your passport used to book the ticket is damaged or is unreadable, there is a serious risk that the staff will turn down your request. You may have to cancel and book a new ticket.

But the results vary between different city stations and staff members. Please keep your trip advisor informed of any changes at the first opportunity to prevent further loss.

When You Should Collect Tickets 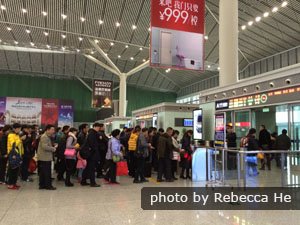 You need to line up to collect tickets.

Generally, a railway station operates 24/7, but there are only a few ticket windows available after 11pm. The operational period of each station depends on the train schedules on a specific day and the size of the station.

If You Collect Your Ticket(s) on the Day of Departure

We suggest you get to the railway station 2 hours before departure, as there may be long queues for collecting tickets, security checks, and check-in procedures. There are always long queues in train stations.

If you wait until right before your departure time, you run the risk of missing your train. 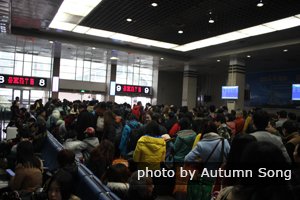 In Peak Seasons — as Early as Possible

In peak seasons, there will be more people in the station and long queues for ticket collection. It's best to collect your ticket(s) as early as possible during peak seasons.

4. There is also very likely to be a traffic jam during the rush hours at the weekend.

See Chinese Public Holiday Travel Rush for dates when you should definitely collect your train tickets early. Be aware that students will travel by train during the summer holidays (mid-July to late August) and winter holidays (mid-January to mid-February).

Where to Collect Tickets 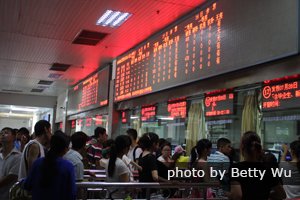 In some big cities, there are many train stations. China Highlights recommends that you collect tickets at the nearest station, or from one that is centrally located with easy access.

Don’t Line Up at the Wrong Windows. In the ticketing hall, there are many ticket windows for different functions. Passengers can buy or collect train tickets for all routes, destinations, and train types at most of the ticket windows. There are, however, two or three exclusive ticket windows used for ticket refunds, cancellations, or endorsing.

You can collect the tickets booked online at any ticket windows except for the refund and cancellation windows (退票窗口). 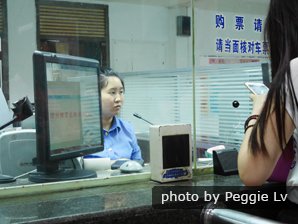 A ticket window at a train station

Don’t expect the officials at these windows to provide an English service. They will cancel your ticket(s) if there is no conversation to show your intentions when you are at a cancellation window. The Chinese sentences below may be helpful:

Self-Service Ticketing Machines — Not for Foreigners

There are 24/7 self-service ticket machines in many train stations. Unfortunately, foreigners cannot use the self-service machines as the machines only recognize Chinese ID cards, not foreigners' passports.

There may be only two or three railway stations in one city, but there can be more than 10 train ticket agencies. Find the nearest one to collect your tickets from. They are usually less crowded than railway stations.

Be aware that you need to pay a 5 yuan service fee for each ticket, no matter whether the tickets relate to trains departing from the same city or not.

Despite the service fee, it is worthwhile going to a ticket agency because it's more convenient than heading to a railway station and waiting in a long queue.

It's quite difficult for you to find a ticket agency if you don't know Chinese. Try asking some locals for help or taking a taxi by using a card with the following helpful Chinese phrase printed on it:

Bear in mind that a ticket agency can sometimes be farther away than a railway station. Also, the opening hours are shorter than those of a railway station, usually opening for work between 8am and 5pm, while some open later and close earlier.

So you are recommended to collect your tickets at a train ticket agency between 9:30am and 2pm.

Procedures You Will Need to Undergo to Get in Your Train

Find the ticket collection window at a railway station -> Pass the security check -> Find the right waiting area to wait in -> Line up to have your ticket(s) checked -> Get onto the right platform -> Find the carriage that your seat(s)/sleeper(s) is in -> Get on board!

See more information about how to board a Chinese train.

Here are some useful sentences — you may save a photo/screenshot of them. When you don't know where to go, you can show the appropriate phrase (and your ticket), ideally to the railway station staff. 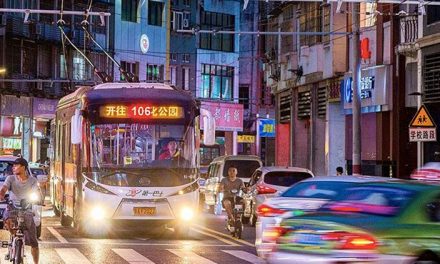