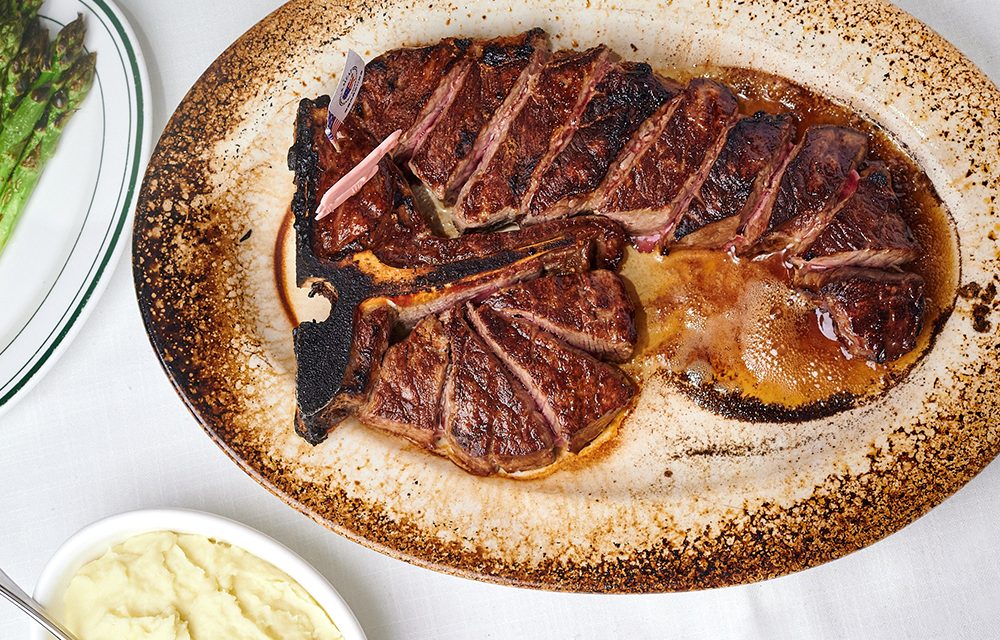 What It Is: Wolfgang Zweiner (not Wolfgang Puck) is an old head waiter from Peter Luger, New York City’s most iconic steakhouse. The white-haired waiter spent 40 years in a place known for its beef, not its service, and he came out of that knowing a few things about what makes a good steakhouse work. Peter Zweiner is Wolfgang Zweiner’s son and a former investment banker. When dad talked about retiring, the son’s business sense put him at the head of a new steakhouse, instead.

That was Manhattan in 2004 and the resemblance to Peter Luger’s, from the signature porterhouse steak for two, served on a sizzling plate, tilted to collect the juices, to the broiled slice of thick-cut bacon, raised some eyebrows.

Ultimately it won over the critics, and the father-son team began a march across the globe, expensive steaks in hand. Now they are an international steakhouse chain with locations from Beverly Hills to Waikiki and Tokyo to Cyprus. Hong Kong has one. Beijing has one. And now, as of the very end of 2018, Shanghai has one too. First Impressions: Why Hongkou? On arriving to Wolfgang’s Steakhouse, which is in a kind of mall attached to the W Hotel, it slowly dawns on you. Here, to the left, is a classically handsome dining room, in tufted leather banquettes and dark clubby wood, for more than a hundred people. There, on the right, is a polished marble bar for dozens more. Farther in, it’s another dining for another fifty people. In the back, the private rooms. All told, the space is nearly 1,000 square meters, including a spacious kitchen housing three infernally hot broilers (the secret to the impressive crust on the cooked steaks), and a dry-ageing room that holds their special USDA Prime sides of beef, six thousand kilos at a time — two million rmb worth of beef. They need a lot of space. And with costs already high, adding to it with a downtown space was just not an option. No matter. Beef like this is worth traveling for; the price of a Didi is going to be the least of your financial worries after a meal at Wolfgang’s. The average person spends about 1,000rmb for dinner here. And still you should come. I went in skeptical of a soulless corporate raider peddling extremely expensive steaks to newly rich Chinese and came out so drunk on Wolfgang Kool-Aid that a check of several thousand rmb started to feel like a charity donation. Why. Because USDA Prime beef is already the best the country exports (and accounts for something like just 2-3% of all US beef), and when you take that, dry-age it for at least 28 days, as Wolfgang’s does, and then slice it an inch thick and broil it at 1,800 degrees Fahrenheit, so the outside takes on a deeply burnished, sizzling crust that no pan or mere grill can provide, while the inside is a beautiful, blushing pink-red… well, that’s what eating meat is all about. It is salty. It is bloody. It has a chew to it. It is MEAT! The signature cut is the 1.2kg Porterhouse, which, once you factor in the high import taxes of US beef in China, and the wastefulness of dry-aging, which both add to the cost, lands on the menu with a thud and a shiver at 1,600rmb. It is worth it. IT IS WORTH IT!

How? It’s big enough for two people, yes, but it’s an irresponsible amount of meat to eat for two people. It should really be shared for four, alongside a smoky and crispy slab of BROILED BACON (38rmb), the kind of ballsy dish that is sorely lacking from other steakhouse chains, and maybe a bourbon Old Fashioned. When you do the math, that’s 400rmb per person, minus sides. I imagine there is a salad on the menu — I don’t care. I know there is a crab cake that is basically pure Malaysian crab. Are there other sides on the menu? Yes. They are called Ribeye (900grams, 980rmb), Sirloin, and Filet Mignon. I may still be a little steak-drunk as I write this, hours after the fact, but, yeah. Wolfgang’s. Made me feel like a proper carnivore again. Loved it. What It Is: Have you heard of Japanese cake brand LeTao? It’s all the rage. But even hotter (colder?) than LeTao is Glaciel, its sister brand from Tokyo, which just opened. It sells ice cream cakes, like small ones, for 199rmb, as part of a set dessert. And it’s reservations only. ONLY. (Until 9pm.) Glaciel, which opened in Xintiandi on Valentine’s Day, specializes in entremets glacé (ice cream cakes). Right now, during the soft opening, it’s 199rmb for a drink (Americano, latte or black tea), three petite milk chocolate biscuits, and a cake of your choosing. First Impressions: Chic. Cute. Girly. In the best way possible: white and red with rose gold ornaments, elegant tableware, and especially cute cakes. No surprise that when I went, all five tables, including ours, were busy taking pictures. Their best seller, Balloon de Fruits, is an almond cake topped with six fruit-flavored ice cream balls that tastes like summer. Sour and fresh, it surprises with crunchy white chocolate bits hidden inside the cake. The Mademoiselle, a yellow cheese-y “ladybug” ice cream cake with raspberries in it, tastes more cake-y than Balloon de Fruits. The mascarpone cheese made it creamy and rich. Overall, the cakes are good. Overpriced, definitely. But Shanghai is crazy for cute photos, exclusivity, and cakes, and Glaciel has combined all three. It should be nothing less than a social media phenomenon.