[On The Radar]: Bleu Bar, Devil’s Share and Dassai Bar 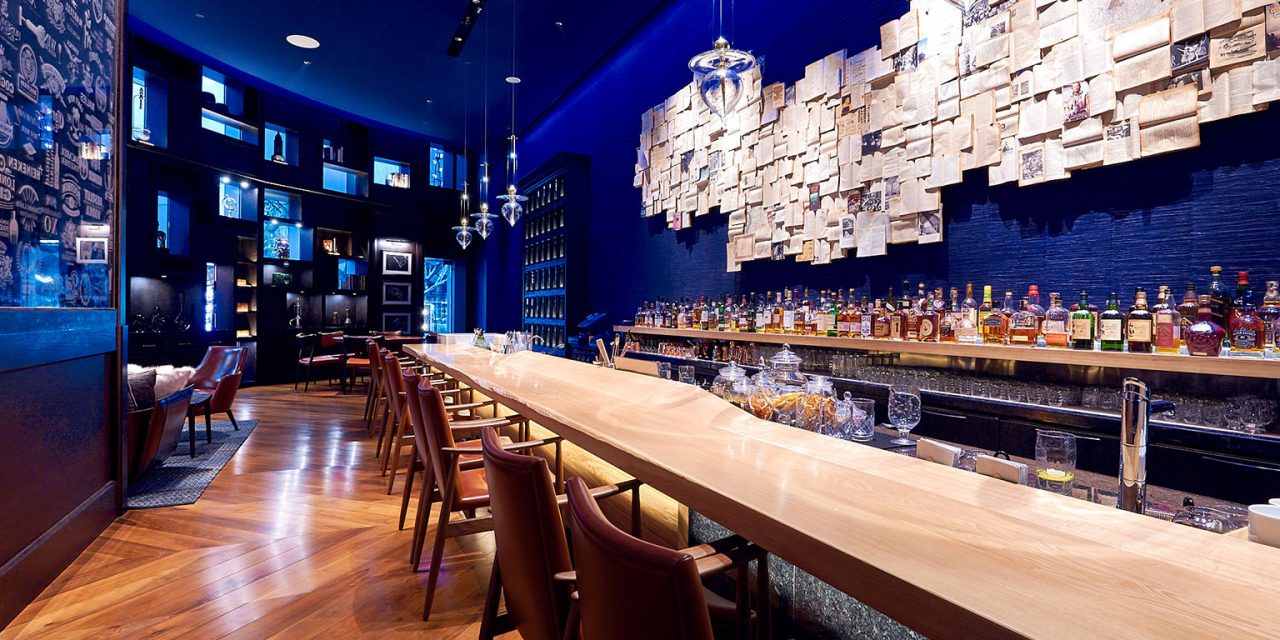 
What It Is: Physically replacing Éclair, Andaz Hotel's in-house patisserie, and filling the spiritual void left by the closing of Xuan, Bleu Bar is Andaz Hotel's new centerpiece watering hole. Designed by Japanese firm Tofu Inc, it certainly is very bleu, featuring an extensive blonde-wood log bar with comfy low bar seats. Thumbs-up on the bar seats. Sprinkled in the window-nooks are musical instruments and curios, and there's a massive pair of angel wings on the wall made from retired pulpy paperbacks. Couldn't get close enough to see which one had the full-page picture of Kevin Costner from Waterworld. Behind the bar is one Corey Xiang, a recent Shanghai arrival who's spent a fair amount of time on cruiseships. He and his staff are serving up Prohibition-style cocktails, which apparently means bold flavors over whiskey and bourbon, which feature prominently on their signatures list. One, the "Chuan"groni, hah, contains Cityson "Chinese liqueur." Prices are all 98rmb++ for the signatures, 15% surcharge, grr. The spirits list is expansive, with a couple decent ryes sitting next to the Single Malts. Bar snacks from the hotel kitchen start at Mullet Roe and go up to whole Boston Lobsters, 4-person smoky beef skewers grilled on cherry wood and foie gras mousse. 
First Impressions: Hotel bars, when they suck, feel designed for an income bracket rather than a human being. More so than bars in Shanghai usually are. Bleu Bar, at least, doesn't suck. The cocktails are predictably well-done and mildly interesting. The Kentucky Tea Time (98rmb++), despite the effete name and presentation, kicks like a mule. So, sure! A nice hotel bar in a city full of nice (or sucky) hotel bars. Decent place for out-of-towners to cure their bleus. 
What It Is: Cut off one head and two more will grow. The original Devil's Share used to occupy the space most recently made famous by The Odd Couple. It was a bit of a mystery. Some say the owner, some fuerdai or something, just kept it as a space where he and his friends could drink whiskey and smoke cigars. That's just a rumor, but from what I've read and heard, it would've fit the role perfectly. An expensive Constellation, basically? Whatever the case, when it closed up shop, it then sprang up almost immediately in two other locations.

The first, less than a minute's walk from the original, is Devil's Share Barrel & Barrel, in an outside bay of Xintiandi Style. Red-and-black vested bartenders work under a halo of whiskey and gin bottles. Did they just fold the branded hoarding onto the right-side wall when construction finished? The back wall is just a curtain between it and the mall. Feels pop-up-y. Their Anfu Lu location is more like it, a secluded dark room on the second floor overlooking Marienbad, with leather seating and a lit-up bar back. 
Both still have cigars on their menus.

First Impressions: Yeah, an expensive Constellation. Same dark wood and marble countertop aesthetic with the jazzish soundtrack. Same salty snack mix. Cocktails are all at or way over the 100rmb mark (virgin cocktails 80rmb). The Black Forest Fizz, with Monkey47 Gin and Montenegro amaro was… fine, and cost 138rmb. 
Since you have to leaf through almost the entire menu to get to it, including the bottled beer section (Tempest Armadillo IPA (98rmb), Hel&Verdoemenris (148rmb), I'm feeling the cocktails are not the focus. The whiskey list is, but I couldn't see Laphroaig on there. Cigar list is limited to six options, two of which weren't available.

So yeah, the Xintiandi one feels like a branding exercise, keeping a toehold in its old neighborhood. If you absolutely need to go, go to the one on Anfu Lu. I feel like it's truer to whatever appeal the first iteration might've had. Quick Take: The flagship for a popular sake brand is pretty much for fans-only.


What It Is: Brewed by Asahi Shuzo in Yamaguchi, Dassai was launched in 1990 and has become a huge player on the international market, producing a junmai daiginjō-shu (rough translation: top-notch extra-clear super sake) in a region that's usually associated with plonk. It's credited with making sake modern enough for young people to drink. Quick primer: sake is described in percentages, indicating how much the rice grains have been polished before brewing. The taste you probably associate with sake is the result of too much outer coating. The lower the numbers, the higher the price, the purer the sake and more refined and fruity the taste. Official "Dassai Bars" exist in several major cities, including New York. This is Shanghai's first. More of a sit-down dining affair than a bar, it's located on the ground floor of the M-Town complex out by Hongqiao Lu. Although they do serve some food, the focus of the menu are the two pages of Dassai sake. Prices start at 98rmb for a glass of 50%, and goes all the way up to premium stuff like the Migaki Sonosakihe "Beyond" (6,800rmb), which they don't sell by the glass. They've got a 380rmb taster set, which includes a 50, a 39 and a 23, with a tiny primer leaflet and colored strings tied around the glass stems so you can tell which clear liquid is which. They say don't mention the service unless it's either really bad or really good. The floor manager was so-bad-he's-good. He'd lean over our shoulders whispering "service" as he placed sake glasses before us. He'd complement our photography and bring extra table lights. When I asked where the bathroom was, he took me by the crook of my elbow and walked me pretty much to the stall. He was a magical being, and my favorite thing about the place. First Impressions: The classiest sake experience I've ever had, though 99% of my sake experiences come heated, with Asahi chasers and skewers. Dassai Bar is clearly for die-hard fans of Dassai sake, people who treat it like wine, or people who want something more niche that they can treat like wine. You can get grey market bottles off Taobao for less than half the price, so the only reason to visit this outpost is if you'd like to try out the 380rmb set, or support the distillery's legit channels. If that's not you, maybe go elsewhere.

Did you know there's a Helen's in M-Town? Probably the nicest one in Shanghai.